To Love, Honor and Obliterate

To Love, Honor and Obliterate 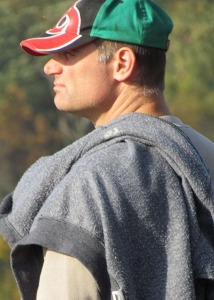 A marriage is often tested to its extreme limits by the sad fact that those things precious to one person are not always precious to the other. In the early years of my marriage I boxed up my husband’s life (pre-me) with the ruthlessness and efficiency of a paid-by-the-hour home organizer. I particularly remember a Pepsi Cola can covered in Arabic that he brought back from Kuwait, and which he fully expected would live on our mantelpiece. It joined an Iraqi beret, an outrageously ugly rug and a garish poster, all in a box labeled ‘Memorabilia’ which lived in a little corner of a cupboard under the stairs.

Over a span of twenty years, that box has had several new homes in different cupboards under different stairs, but as I point out to my husband often, at least it still exists. The same cannot be said for my Mason Cash No. 12 mixing bowl, my antique desk chair and, as of this morning, my beloved Gordonia lasianthus and ‘Red Rocket’ Crepe Myrtle – which have, like many many others before them, succumbed to the bull in the china shop that is my husband: Hurricane Michael.

My coffee went unexpectedly cold this morning as I wandered out to survey the newly planted garden near the drive and came across the flattened profile of my cosseted and fawned over Gordonia. Surrounded by ostrich fern and hardy begonia, it reclined at a disturbing and unnatural twenty degree angle to the ground. Deer browse in this part of the world, but they don’t trample. This particular act of destruction had “Hurricane-Michael-driving-ancient-land-cruiser-with-broken-wing-mirror” written all over it. I stood in shock and tried to figure out what I would tell the North Carolina plantsman who had given it to me with the express idea of testing its hardiness over the winter. I couldn’t even get it through the fall.

I stomped into the house with the righteousness of a thousand wronged gardeners and found my husband in the shower. Advantage, Marianne.

“What on earth did you do to my Gordonia?” I said, whipping the curtain back.

He didn’t skip a beat, and smiled broadly. “Coming to join me?”

My voice froze the water streaming down the tile. “Believe me buddy, you do not want me to join you, I have pruners in my hand.”

My husband is the master of neatly shifting the blame onto my doorstep when he breaks something.  He maintains that he is forced to live in a world that is fragile, and that while other men can sit down on a chair without avoiding the cushions, or pick up a chest without being told not to pick it up by its elderly handles, he must levitate through his house, touching nothing but the floor. I counter with the fact that walnut desk chairs were not meant to be used as recliners and expensive Cutco knives should not be used to cut PVC pipe – that normal people with a bit of care can easily balance the requirements of function and form.  But my husband is not normal. He is a former Marine and all around tough guy. Antique walnut desk chairs and prized Gordonia lasianthus should not be within five miles of the man.

“Why’d you put it there anyway?” he countered. “It’s right on the corner – it’s begging to be run over. Besides it was dark this morning.”

“It’s in the corner because it is…excuse me…would have been…perfectly situated to view from our bedroom – a bedroom which you will not be inhabiting for the next month.”

Perhaps you think me harsh, dear reader, but had you been down to the barn the day before only to find that in the construction of the chicken coop, your new, deep red crepe myrtle was now minus one of its two precious stems with the cage set up to protect it removed and sitting impotently nearby; you too would feel quite justified in sending your husband to the couch for an adult sized time-out….and that’s without telling you about all the plants he’s mowed. There is not space in Heaven for the spirits of those innocents.

Nevertheless, I continue to plant. I will attempt to straighten my little Gordonia, and if it lives, set up a dozen reflectors around it (completely detracting from its beauty). I will re-cage my crepe myrtle and move my desk chair safely and ironically away from the desk. I will hide my expensive knives, and for now I will sheath my pruners. But quite honestly, if I were he, I wouldn’t be sleeping very soundly.