This morning I spent two precious hours as a machete-wielding rock climber cutting back vines and brambles.  This is not an unusual occupation when you live in a woodland, but today I was there for one reason and one reason only: to free from suffocation the immature redbuds that have seeded themselves along the lane that borders our property. 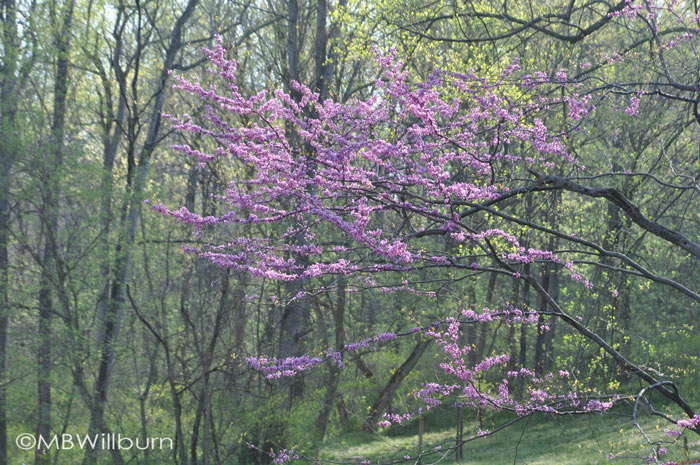 No other besieged sapling received similar treatment. The poplars, sycamores, and locusts were ignored in my quest to showcase this bright star of our native flora, and once done, I headed over to a garden bed to transplant three of last year’s seedlings to better homes.

Garden writers are perhaps too guilty of the sin of hyperbole when trying light fires under the bottoms of a lethargic audience, and I am no exception; but when it comes to Cercis canadensis, and that certain time of year that they begin to color, such words are merely understatement upon understatement. It is the wildness of the thing that thrills me.

Never was a flower more inappropriately named. There is simply nothing red about it. Blossoms are a deep purple pink – almost unnatural next to the shell pink of black cherry which bloom in woodlands at the same time.  Blossoms not only sprout from branches, but often from the trunk as well. As they age, the bark can darken to a greyish-black, creating a strong visual statement. 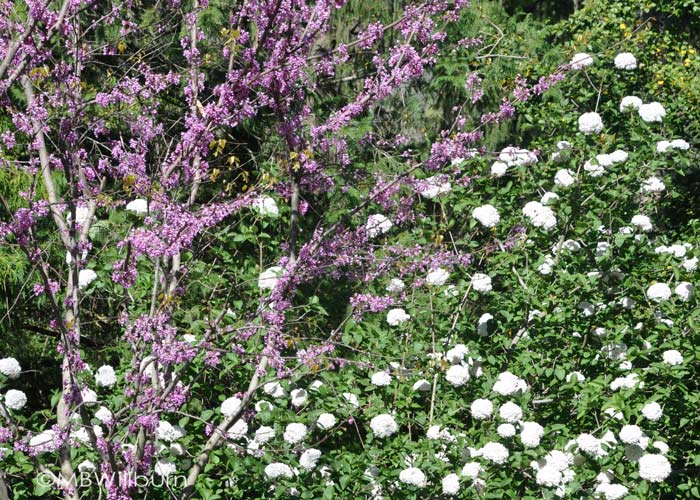 In the suburban landscape, redbuds are best contrasted with whites or yellows. Here a snowball viburnum.

A statement indeed. They are garish, flagrant – vulgar even – and can throw the homeowner’s tastefully subdued spring montage into disorder, clashing with the lighter violets of lunaria, hesperis, primrose, or viola, and making the orange-pinks of quince shift in your estimation.

Against bright yellows however they are joy itself. Look to daffodils, wood poppies, yellow primroses and late blooming forsythia to provide the perfect foil, or simply enjoy them at the edge of woodlands where they pick up the bright chartreuse of new foliage and scream at the unbeliever that spring is really here.

Redbuds are relatively short lived trees with life spans of 20-30 years.  A warning: they won’t make it easy for you to finally pull the plug.  They prefer lingering death scenes redolent of Shakespearean tragedies. 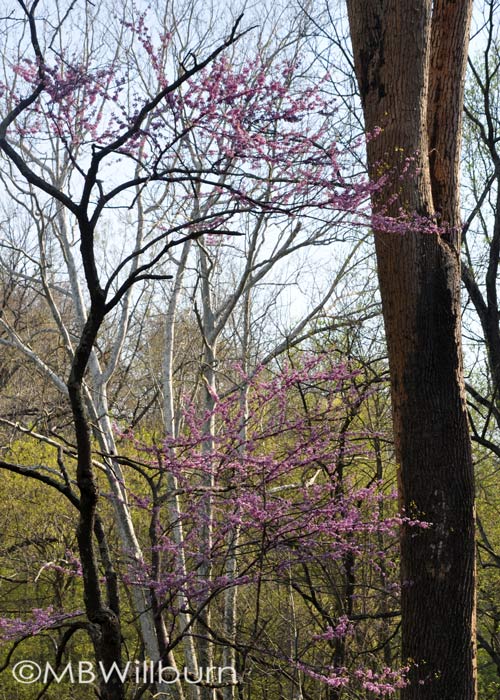 This gnarled specimen is in terrible shape…until it blooms each year.

I have a gnarled and darkened one outside my living room window that the former owner was on the verge of cutting down for ten years…and then it would bloom just as he started to reach for the Stihl.  Four years later I feel similarly, and am hedging my bets by allowing a few strong saplings to seed underneath. When they are of age, action will be taken. The king is dead. Long live the king.

Redbuds are an understory tree, but where they will reach towards the light in this situation and grow up to 25 feet , they become a rounded, well behaved tree in a full sun exposure, and often top out much shorter.

Their leaves are classically heart shaped, and one of the easiest to identify in the landscape, making them a fun ID for children learning their trees on long summer nature walks. Seeds are carried in flattened pods which betray their membership in the legume family.

Though I grew up with the western C. occidentalis and remember it with fondness, it was C. canadensis that eventually charmed me.  This may have much to do with the fact that I also grew up in evergreen winter landscapes that changed little between the seasons – a state where SAD stood for Sunny All Day, not Seasonal Affective Disorder.  Spring in the Mid-Atlantic can have an exaggerated effect upon the senses.

In recent years there has been a revival of interest in the eastern redbud, and this might be due to the fascinating cultivars that provide much more than spring bloom.  The compact ‘Rising Sun’ is perhaps my favorite, with orange-red tipped chartreuse leaves, but there are many others –  ‘Forest Pansy’ with burgundy leaves; ‘Silver Cloud’ with white marbling in the foliage; ‘Alba’ with flowers of white; and weeping varieties of many others commanding a king’s ransom. 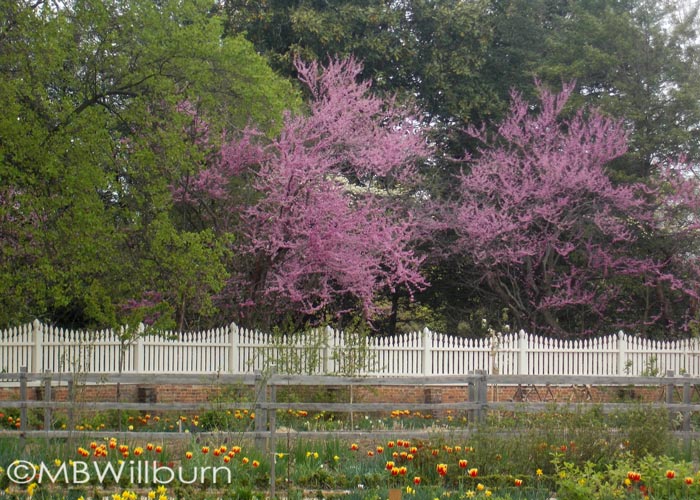 At Mt. Vernon, redbuds are used to glorious effect in the flower garden.

They are a bridge in the landscape. When the pears and cherries have gone, the magnolias have most likely burned up in a tragic freeze, and the world waits for crabapples and dogwoods, there is the redbud.  Shameless and sensational – they are fabulous heralds of all the promise ahead.