The Berries of Autumn

The Berries of Autumn

With familiar regularity, autumn evokes in us an emotional response and draws us back to center as winter approaches.  It softens the knowledge of what is to come and gives us time (if we choose to take it) to reflect on what has been. I think this is precisely why I value the berries of autumn so much.  They represent the culmination of a growing season and move us seamlessly and painlessly into Winter, Part I – The Holiday Season, AKA Winter Lite. 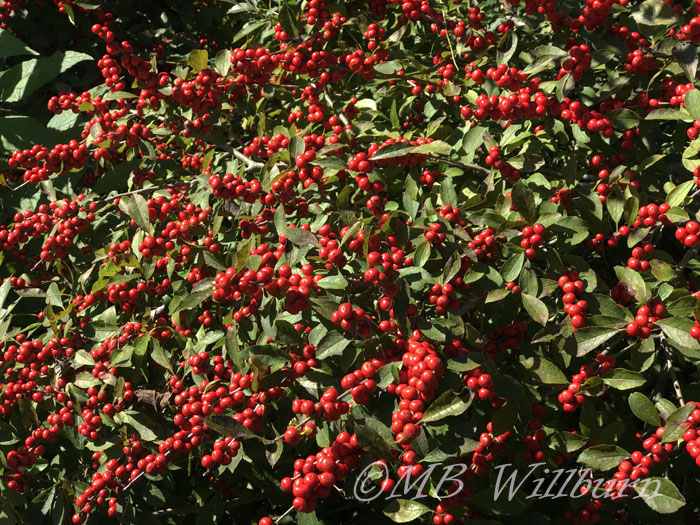 Autumn berries are colorful.  They are abundant.  Matched with the breezy purity of ‘Honorine Jobert’ Japanese anemones, they are magnificent.  They are also incredibly difficult to define.  Many edible fruits that we culturally consider berries, botanically speaking, just aren’t (such as blueberry). Still others that we consider fruit, or even vegetable (such as avocado), are botanically, berries. 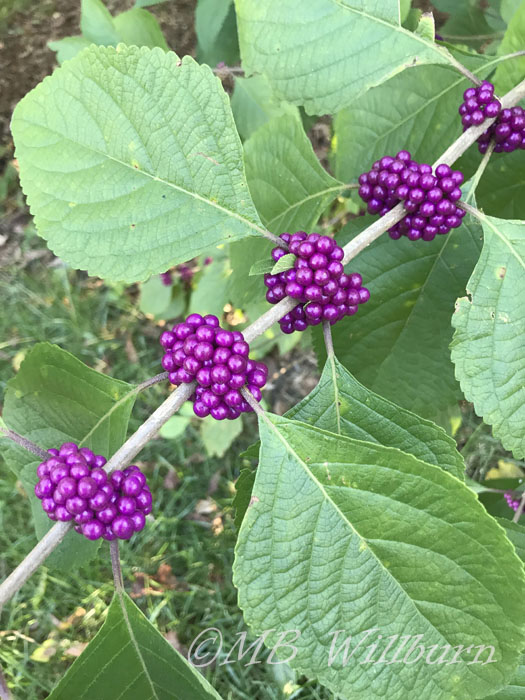 Fortunately, enjoying a spray of holly berries in an autumn wreath is not dependent on whether or not you know they are actually multi-seeded drupes.  Let’s leave such pedanticism to hard-working botanists to ponder over mugs of warm milk and instead work with the commonly held definition of berries as small, often very colorful fruits that adorn the branches of some of our most beloved shrubs and small trees.

If a quick scan of your garden proves you to be sporting a severe deficit in the berry department – or indeed the multi-seeded drupe department – I’d like to change that with a few suggestions.

Plant one or plant ten, plant now or plant in the spring, but for Heaven’s sake, plant them – your garden will be greater, your wreaths will be wreathier and Winter, Part II – The Reckoning, will be bearable.

The common name beautyberry describes the many species of this genus with precision; and though I love the darker foliage of some hybrids such as ‘Pearl Glam’ & ‘Purple Pearls’ and enjoy them particularly when in flower, I do not find the berrying to be as abundant as that of C. americana or C. dichotoma.

If you’re looking for the whole package – berrying and bushing – C. dichotoma’s graceful arching habit trumps that of our native C. americana in my humble, if sometimes politically incorrect, opinion.  Habit aside, the berrying on C. americana is strong, and ‘Welch’s Pink’ is a stunning pink-berried selection particularly worthy of your attention. Self-fertile. 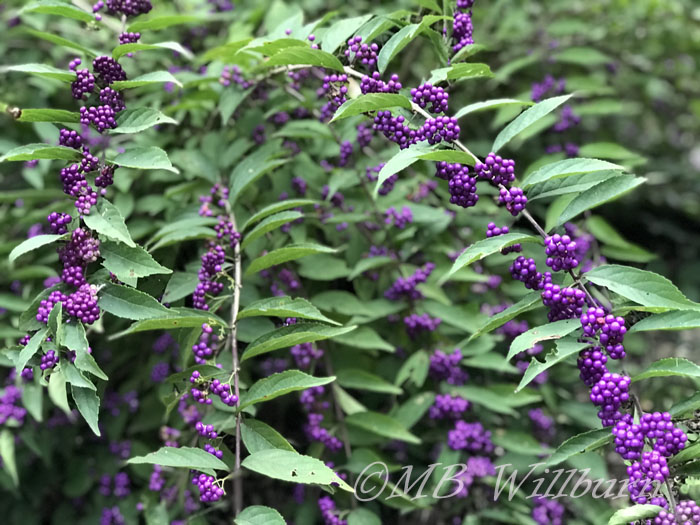 Bittersweet is a fall favorite – if also a high maintenance choice for the gardener. The long, girdling, woody vines and scarlet red berries sheathed in papery yellow packaging can make wreath-makers out of the most reluctant among us. But take note: Oriental bittersweet (C. orbiculatus) is environmental no-no these days due to its invasive nature. Gardeners are urged to choose C. scandens, our native species, when buying (you’ll need male and female plants).

Got some and not sure which it is? The American species holds its berries in terminal clusters where Oriental species sprout copious berries along the leaf axils.

The red berries adorning our common Florida dogwood (C. florida) are some of the brightest of winter, but they don’t take well to being brought inside on a severed limb (I’ve tried).  Instead, enjoy them outside and if you’re planting a new dogwood, find a place with a generous amount of morning sun to encourage those blooms and berries without leaf scald. C. kousa also fruits well and edibly, but the late summer fruits rarely last through September.

If you can get them past the deer, redosier dogwood (C. sericea) bear bluish-white berries in late summer which can last into fall – until the birds get them that is. Self-fertile. 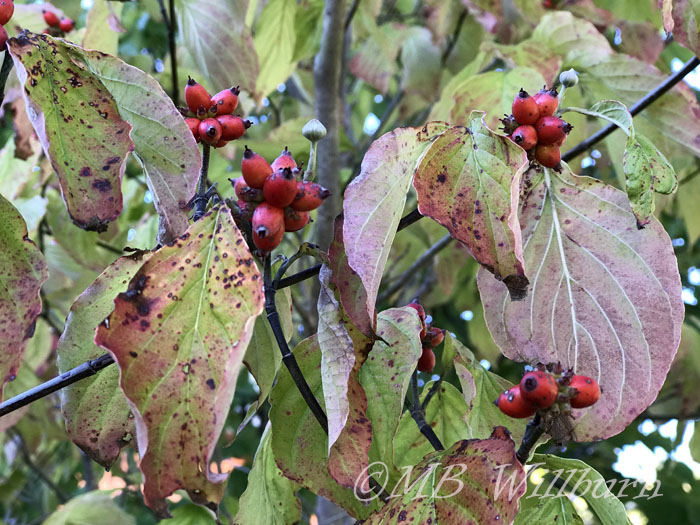 Most people are familiar with the evergreen boughs of American or English hollies, but many assume that the heavily berried, leafless stems seen in wreaths must be florist magic – including, sometimes, the florists themselves. They’re not – they’re (more or less) cultivars of the deciduous species Ilex verticillata and they’ll add much to your garden and arrangements.

I’m particularly fond of the generous tight clusters in ‘Winter Red’ and ‘Winter Gold’ but there are many cultivars worth trying such as ‘Sparkleberry’ or ‘Red Sprite’ (the latter of which sports a smaller habit and a coarser berry). You’ll need a male pollinator – for those two winter girls look for ‘Southern Gentleman.’  Once you’ve got large shrubs you can take from, it’s hard to beat the shock and awe effect of a large arrangement of these berried branches. 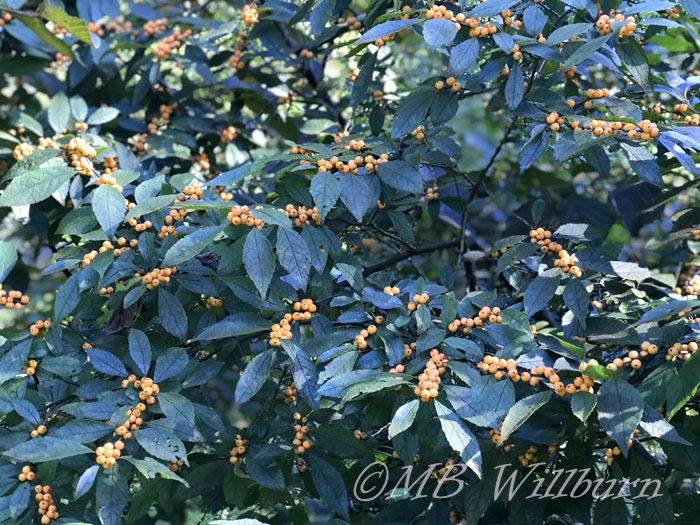 A prolific native in our part of the world, spicebush decorates the edges of woodlands and other part-shade areas with grace and color. Tight clusters of chartreuse blossoms are some of the earliest color in an awakening landscape, and birds love those fall berries. So do foragers – who use them in peppery dry-rubs and adventurous ice creams.

Though the berries start to redden by late August in the Mid-Atlantic, they come into their own when spicebush leaves brightly yellow and begin to fall, and are found more heavily on plants that receive a good amount of sunshine in moist soils.  This is also a male/female party so be aware when you buy.

Nandina domestica is controversial, and is avoided by birds, but when grown well, it’s a stunner – particularly for a part shade location.  I’m still trying to stun someone at my place, as I can only coax my mature shrubs to bloom, not berry. Still investigating why, and interrogating a few bees at the moment, but most gardeners have very few problems apart from nativists insisting they stop growing it.

In response to these concerns, there are many striking foliage-first cultivars now such as ‘Obsession’ and ‘Lemon Lime’ which, while not sterile, flower and fruit sparsely if at all.  If you want those bracts of berries however you’ll need to read the tags before you buy. Self-fertile, but does better in groups.

I grew up with a pyracantha scrambling up our stone chimney in California and fought the thorns each November to bring heavily berried branches in to drape over the Thanksgiving table.  Here in the East, I still consider it a fall staple – though I am aware that hardiness can be marginal if not in a sunny location in very free-draining soil. ‘Mohave’ now scrambles up my barn, and I grow ‘Silver Lining’ for its variegated foliage in a mixed border.

Flowering (on old wood) is showy, if malodorous, and the resulting berries ripen in September and persist well into winter.  Prune to shape just after blooming, but don’t be too harsh – every blossom-laden branch you remove is one less berry-laden branch for that Thanksgiving table. Self-fertile (an understatement). 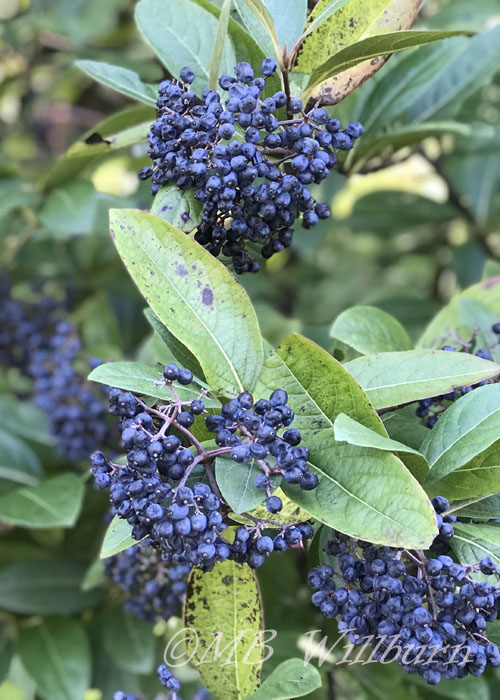 So many species and cultivars, so little time.

Viburnum is a large shrub that sometimes holds its own as a specimen, and is sometimes better growing within a mixed border where it doesn’t have to be everything to everyone. For berries, my very favorite has to be V. dilatatum ‘Cardinal Candy’ but next on the list is the orange-fruited ‘Michael Dodge.’ V. nudum ‘Brandywine,’ is a true stunner with pink purple berries to match pink-tinged foliage. A friend grew it this year and now I covet it most heartily.

V. trilobum, or American cranberrybush viburnum is a native miracle in the landscape – bringing rich, reddish orange foliage to fall with those equally rich bracts of berries – but boy do I have to fight the deer on this one.  V. wrightii is another heavy fruiter and is currently waiting in the wings of my garden for a site and a shovel.

Viburnum is self-fertile, but growing more than one ensures a better fruit set. 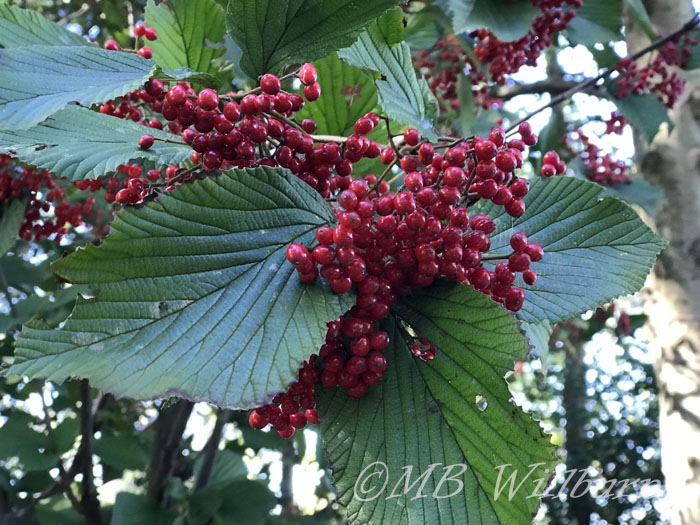 Other genera to explore – aronia, cotoneaster, skimmia, crataegus – and if you can expand the already dodgy definition of ‘berry’ to include the equally dodgy one of ‘fruit’ – hip-forming species of rosa, the tiny crabapples of some malus species, and poncirus for dramatic crops of tiny yellow oranges held between beautifully lethal spines.

This article originally appeared in The Frederick News Postt and is reprinted with kind permission.