The Bees are Dead, The Goldfish Are Not, and It’s Okay.

The Bees are Dead, The Goldfish Are Not, and It’s Okay.

It’s the first day of spring and the bees are dead.

After a long yesterday assessing the winter garden hangover – the deer-nibbled evergreens, the chicken-uprooted polygonatum, the muddy mess that will someday house new garden beds, but currently looks like the Somme in 1916 – this news hit me the hardest. 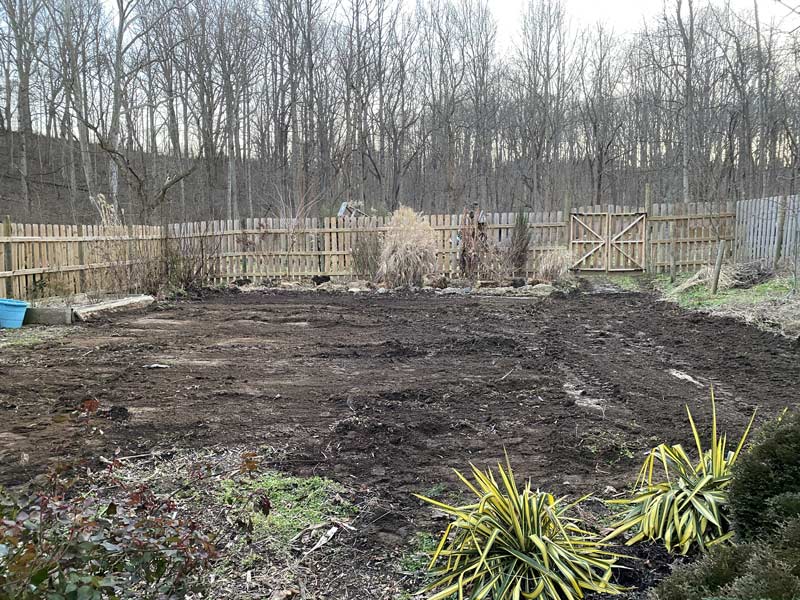 I am not silly enough to mourn the death of insects that, after all, enjoyed longer lives than their summer sisters, but after a warm winter it felt like a massive failure on my part, and it niggled at me and exacerbated my ratty mood.

It became that broken thorn just under the glove that shifts and pricks as you grip the pruners, and which you won’t locate until you commit to the act of finding your reading glasses.  Which then pricks you further, as you now need reading glasses and what the hell.

I smother the feeling and move on (or so I believe), until it pricks again and I have to stop and question why I am snapping at the dogs. The goldfish are happy, successfully overwintered, and thriving; but instead of rejoicing, my mind turns to how long it will be until the heron finds them.

What is my problem? Where the hell is that thorn?

Oh that’s right, the bees are dead.  I failed. Everything is not ticking away as it should be. I have to put on my reading glasses, dig it out, and move on. 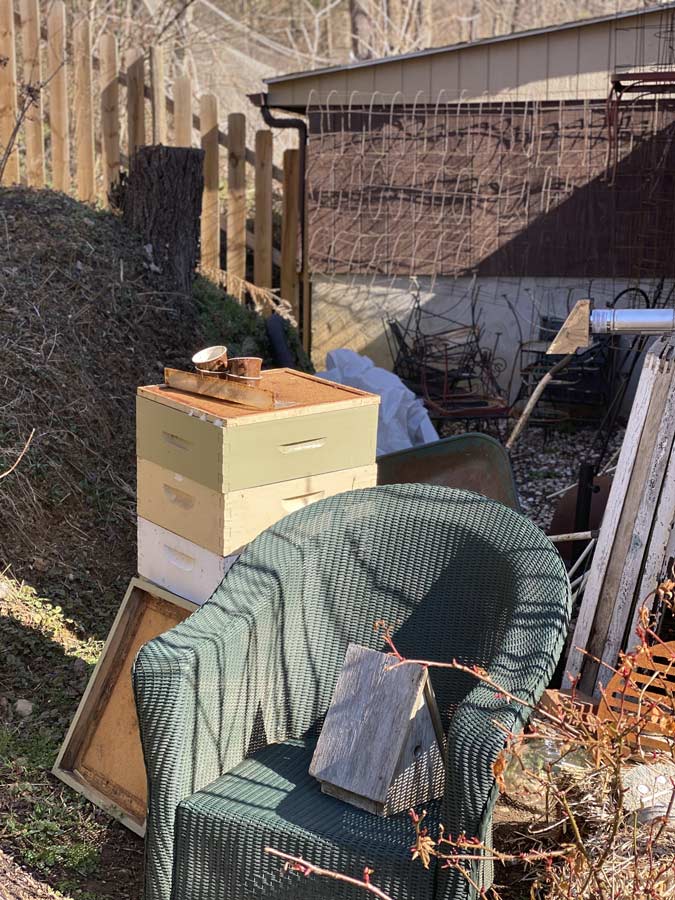 Bee boxes awaiting a clear-away with all the other bits and pieces that need clearing away.

Gardening IS upsetting.  It has some seriously dead-in-a-ditch moments (Dan Hinkley’s excellent phrase, not mine).  And as Scott Beuerlein discussed on Garden Rant last week – it’s the long game we’re after.  Long stretches of process, with glimpses of result mixed in to keep you hungry.

Reading such confessions is fantastically rejuvenating when you’re still smack in the middle of a young garden. It creates camaraderie across the miles, reminds you that you’re not alone, shatters the fantasy, and deftly removes that thorn. Thank you Dan. Thank you Scott.

It’s harder to find that thorn in an age of Instagram. Though it borders on heresy to be critical of an era that [theoretically] keeps us ever-connected, and über-informed, I cannot help being thankful that I didn’t have the opportunity to start my journey with plants by daily weighing myself against the feeds of 5,634 smiling social media influencers, 95% of which apparently live in a close-up, filtered world of endless happiness and endless summer. For me, the thorn is easier to recognize, locate and dig out. 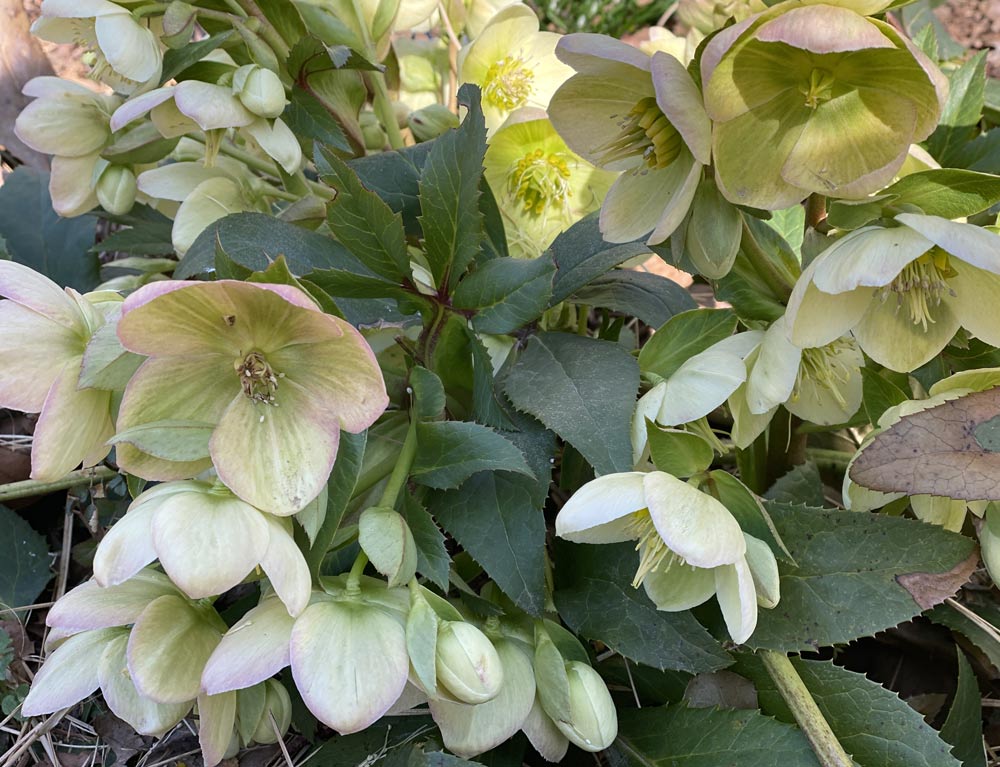 But what about a newer generation of first-time gardeners understandably addicted to heavily edited fantasy? Or unable to pursue the magic of what Deep Work author Cal Newport terms the ‘super power’ of undistracted, focused thinking, and in time, use it to become extremely skilled at the art and science of gardening? Will they have a harder time coming to grips with the realities of a gardening life? Or will they feel inadequate in the face of a Gardening Life™ and give up? 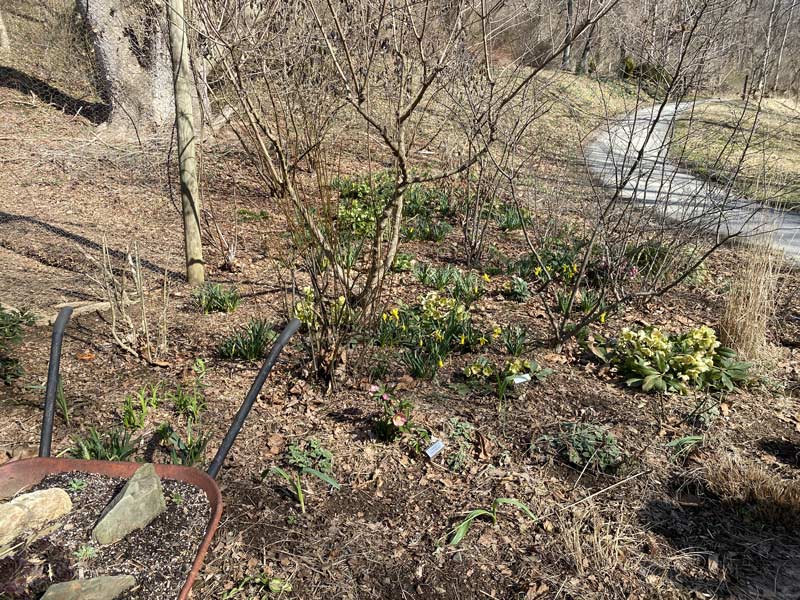 …but a little less impressive in a very young, early spring garden.

Last week I attended a lecture by an author on how to take and process better photos for Instagram.  Her tips were excellent and her delivery, engaging. I’ll probably buy her book and I’ll definitely buy her a drink if we ever meet.

But I left the Zoom feeling vaguely unsettled by the level of fantasy peddled to an unsuspecting (?) public. Ugly compost bins and weedy patches in soft, far-away focus, specific filters used to create continuity across snaps, post-processing beyond the reach (or dreams!) of Ansel Adams. Yes, fantasy has existed as long as we’ve had media vehicles from which to peddle it, but we didn’t keep those vehicles in our back pockets to tempt us and taunt us 24/7. 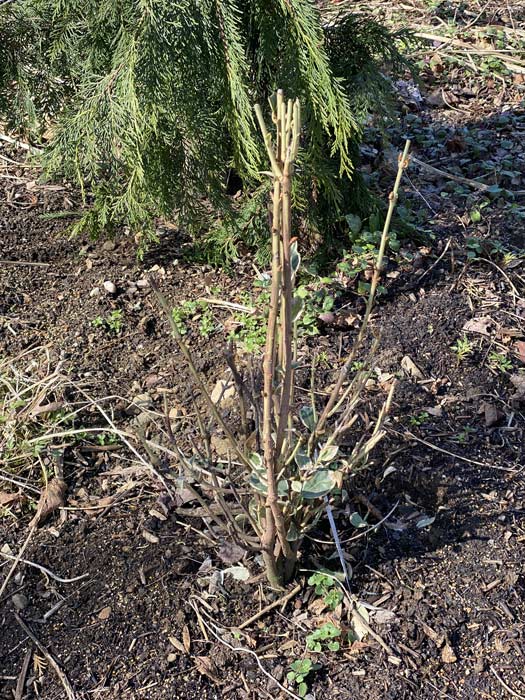 Not Insta-worthy, but a real part of my garden right now.

I think that many of us (pre-social media) also developed a certain amount of cynicism when it came to these images and stories, offered as they were from marketing teams on high. You just assumed the whole damn thing was groomed/airbrushed/produced. You appreciated it for the aspirational art it was, and the way it made your fingers itch to create something amazing outside. And then you closed the magazine/book/newspaper and got back to the garden – not to be interrupted for the next eight hours, deep work on your mind.

It’s harder to keep that healthy sense of skepticism when your very ordinary next door neighbor is streaming endless premium content with attached soundtrack and slo-mo moments. If she’s doing life and garden that well, there must be something wrong with you.

Except no, there isn’t. The daily reality of my garden is very different from the photos that adorn this website.  No I have not doctored them and yes those moments exist, but not all the time and not all together. From the right angle and with the right framing, variations of them exist in all gardens. The plants are just different. 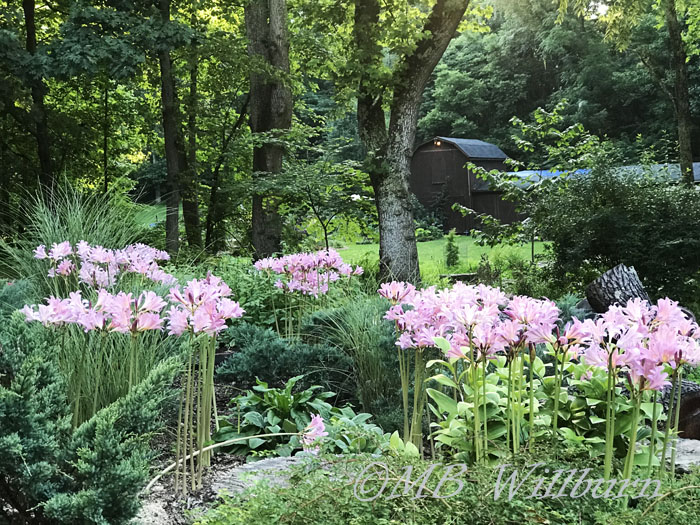 I adore this view of Oldmeadow – and it is very definitely a real, untouched one. However, during the other 50 weeks of the year when the lycoris aren’t blooming, this bed bores me to tears and probably you too. I’m working on it, but it will take time.

So be aware. That’s all I’m saying.  Recognize that the dead-in-a-ditch moments are real and they’re coming for you as you expand the scope of your garden.  One day the bees will be dead, the euonymus stripped and it will feel debilitating. You can stop there, or you can move on to the next day when you realize that it was going to be a major pain in the butt to move them while you renovated the kitchen garden and, hmmm, you’ve still got last year’s honey in the pantry, and hey, that’s 40,000 less lives to worry about in August. And did you really want a Silver Queen euonymus when there are Silver Lining pyracanthas in the world anyway?

Dead-in-a-ditch is something you’re going to have to deal with more than you won’t.  Yes the garden is therapeutic.  It nurtures your spirit, feeds your family, impresses your friends, and provides a backdrop for some of the best moments in your life.  But it can also weigh heavy some days.  Ignore the media, locate and dig out that thorn, and keep moving toward Scott’s long, lingering game. It’s a good one.

Articles. Newsletters. Motivation.
Your email will
never be shared.