Standing on The Edge of a New Season

Standing on The Edge of a New Season

Wednesday night’s after-school activities (and I suppose one could argue, after-life activities) consist of a long drive to a neighboring community where my daughter attends her confirmation class, and I hunt for a quiet chair, an electrical outlet and an unemployed Muse to come and sit with me awhile. 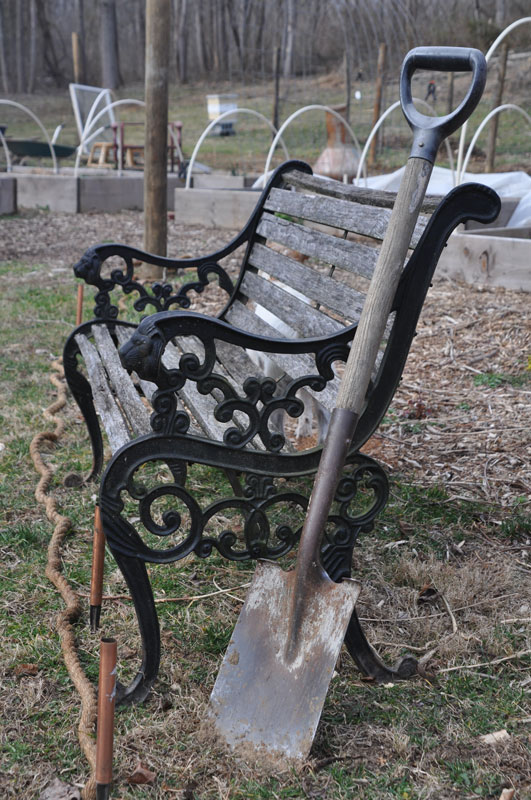 If the garden has seen much in the way of the resident gardener that week, as it most certainly has this one, the task is a happy one. There is simply too much going on to find oneself at a loss for words, and the mistakes, triumphs, eureka moments and abject failures of the last few days in the trenches are easily jotted down to be edited when back at my desk.

So, with signs pointing to a cozy two hours ahead of tireless fingers mapping an inspired stream of consciousness, I was unnerved to find the sight of a blinking cursor on a blank page having an effect upon me not unlike that of a three hour chemistry exam.

I busied myself with wiping the screen and rearranging the position of the throw cushion behind me  – the surest signs of trouble ahead. I looked around vainly for Calliope, or Thalia, or indeed that capricious sprite Fortuna. Alas – no shows all.

Ten desperate minutes went by.  Ten minutes like the kind of ten minutes you used to spend in a mid-afternoon chemistry class in late April when on the other side of the window the trees were flowering and beverages were flowing down undergraduate throats that were not yours.

After the second round of ten unproductive minutes I cursed my ailing brain, slammed the laptop shut, threw my ridiculously priced yet surprisingly unsatisfactory beverage into the trash, and walked, zombie-like, across the parking lot towards the orange logo of a Big Box store that will remain unnamed.

The store was quiet, but busy.  Quiet in that there were no customers.  Busy in that merchandise and plant shipments for the upcoming season were arriving and being shepherded to end caps and impulse buying stations by a network of workers seemingly controlled by the hive mind.

No one spoke. There was no extraneous noise apart from the industrial shifting and thunking of pallets by humming forklifts that occasionally burst into the staccato strains of reverse gear.

There was even less noise in the outside yard, where, in a just a few short weeks couples would argue over which fruit tree to purchase while their children played hide and seek amongst tragically breakable pots from Indonesia.

As consumers, we very rarely have a chance to examine what will be sold to us in the season ahead without the bells and whistles that perhaps make it more than it is. The subliminal messages to buy can be as innocuous and unplanned as a beautiful sunny day, or as Machiavellian as the scent of cinnamon piped into the air – but all contribute to that moment when we finally reach for something and put it in our cart.

Here was that rare chance. No music, no special lighting, no helpful shop assistants, no touch of the je ne sais quoi that is taught to savvy marketers in their cradles.  Just stuff. And me.

For fifteen minutes I wandered behind the Wizard’s curtain, recognizing from recent trade shows the lavish display racks of big brand names and the budget behind them, as well as the modest display racks of smaller brands, and all of the hope and dreams behind those. I looked at the trends I have been told are coming, the clearance aisle of trends that have passed, and the old standbys that watch over all.

Had I brought my laptop and black beret into the store, I might have slumped into a brand new patio chair in this year’s trending color and composed a few lines of terrible verse.  As it was, my watch told me that my existentialist thoughts regarding life, the universe and everything were as nothing compared with the duties of mother and chauffeur.

My reverie thus ended, I grabbed a bag of potting soil and a package of 11wt bulbs to feed ever-hungry landscape lights, paid the computer attendant, and left for the fresh air of an early March night.

There is a season ahead.  It will be exciting, and fresh, and colorful, and tuned exactly to our state of mind on a sunny spring day.

But just for a moment, it wasn’t.