Reflections and Tasks for A Wet Winter

Reflections and Tasks for A Wet Winter

As if to punish me for my naiveté in penning an article in January on the subtle joys of a Mid-Atlantic winter, the Mid-Atlantic immediately doubled down, presenting us with icy wind, freezing rain and single digit temperatures.

Eyes watched me carefully for retracted statements, but I had nothing to retract. The sooner the mud froze up, the sooner I could sharpen loppers and head down to a section of impenetrable woods.

But as it turns out, the Mid-Atlantic isn’t into that kind of punishment this year. Sure there have been tiny spells of freezing rain, and enough in the way of snow to hear the insufferable phrase ‘stay safe’ one too many times, but in terms of overall themes, it’s really all about the rain. And a lot of rain in the winter makes my job – and yours – very difficult. 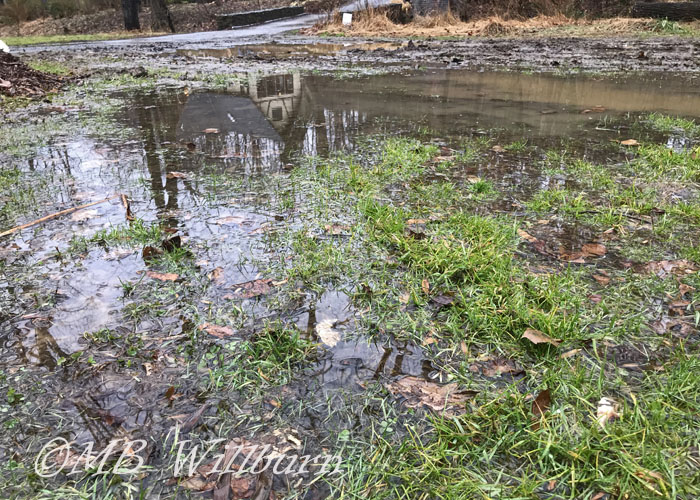 Yesterday afternoon I ran down to the barn for some whatsit or other and could not find a path to the potting shed that wouldn’t drown my hastily donned, but eminently fashionable, Dansko clogs. I returned to the house, whatsitless; too annoyed by the constant rainfall of the last forty weeks to don wellies and try again.

My future Mediterranean courtyard looks like a rice paddy in Borneo – what need is there for whatsits when such cosmic injustice exists? 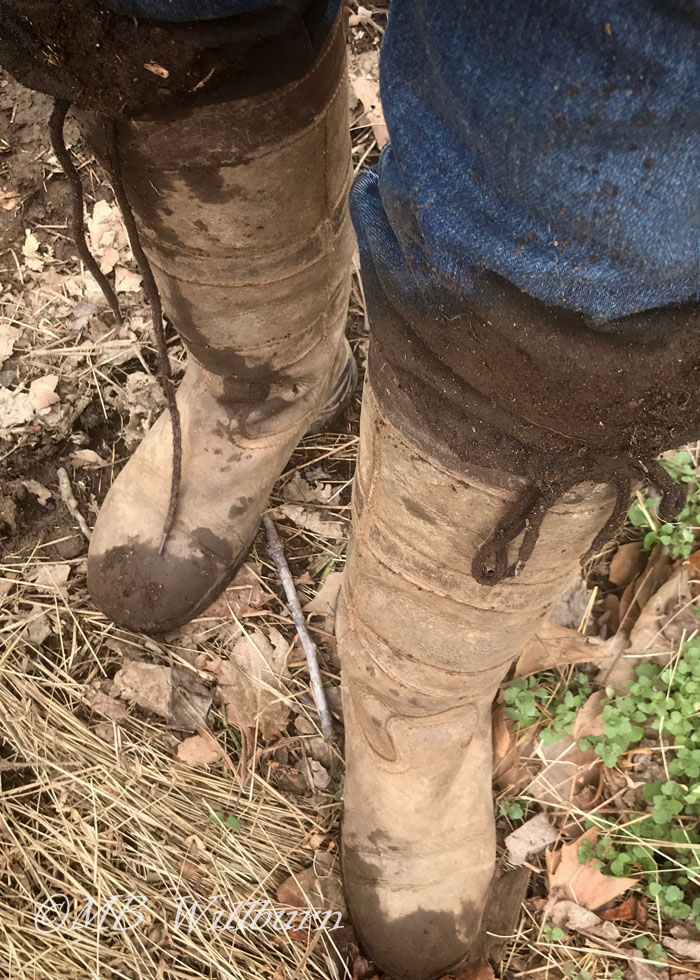 There is a difference between muddy boots and dirty boots, and I find myself longing for more days like this, where a day’s grubbing doesn’t require a change of jeans until the light fades.

And so the wet weeks pass. The mud-time of March no longer marks a special turning of the season as we have been experiencing it non-stop since August. We are in some sort of unfathomable holding pattern that does not resemble winter, does not resemble spring, and makes this gardener long for frozen soil and the ability to take a knee without sinking.

Non gardeners may be blissfully unaware of the normal late winter bustle, but this period is one of serious work. In fact, it’s one of our most productive.

The winter landscape is an exposed landscape – shrunk back to bones and unable to mask imperfections with the aid of foliage and color. It is our chance as gardeners to see clearly and act decisively, clearing brush, trimming shrubs and pruning fruit trees and roses while all is dormant.

Mud makes that challenging, and exponentially increases the amount of potential damage we might do to our gardens in the execution of those tasks.

Heaven forbid we get a few days of intense warm up (as we did not so long ago) which then unleashes the non-gardeners amongst us and spells death for shallowly rooted perennials in beds where angels (and the experienced) fear to tread.

But, as I have also said in previous articles, one must adapt. Therefore my potting shed has rarely been cleaner. Light tables in my family room were set up and anticipating seeds for a few weeks before the seeds actually turned up. 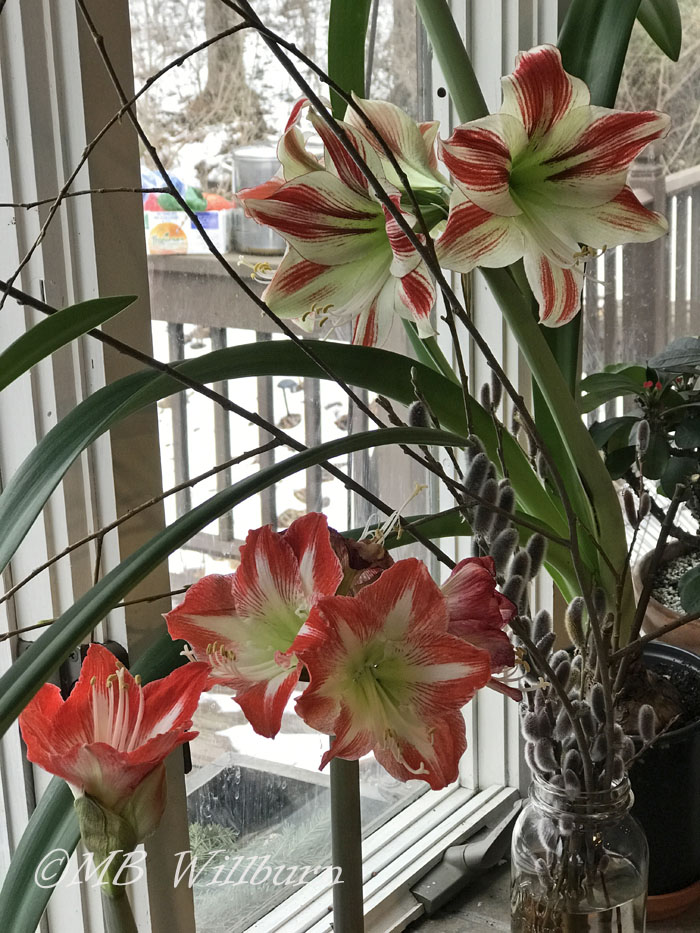 I’ve been taking cuttings of various willow, red- and yellow-twig dogwood and edgeworthia as well as cuttings from house-overwintered tender perennials such as strobilanthes, brugmansia, coleus, alternanthera and the odd succulent; and increasing my stock slowly through the careful use of cold frames, heat mats and plastic-bag/chopstick humidity domes (though the latter is mostly for that temperamental of all divas – the edgeworthia).

There is still plenty of time to take your own cuttings of willow – which root in water indoors – and shrubby dogwoods which root in soil out-of-doors.  Once the willow whips are well rooted, they must be transferred carefully to moist potting soil and not allowed to dry out as water roots can be temperamental.

The red and yellow-twig dogwoods are plunged straight into soft soil, approximately 4-5 nodes deep.  By the time leaves begin to sprout, there are usually accompanying roots.

Both should be cut from last year’s growth.  Working with smaller pieces (8-12”) is usually preferred and recommended, but I have to admit to using longer whips as I use them decoratively as well as propagatively.

The dogwood whips enhance pots outdoors (while rooting in soft potting soil) and the willows decorate vases indoors.  If I were a professional grower, there would be less nonsense and more cuttings made per whip.

Do what works for you, but be quick – once the plants have broken into leaf, you have missed your best opportunity this year to root without fuss. 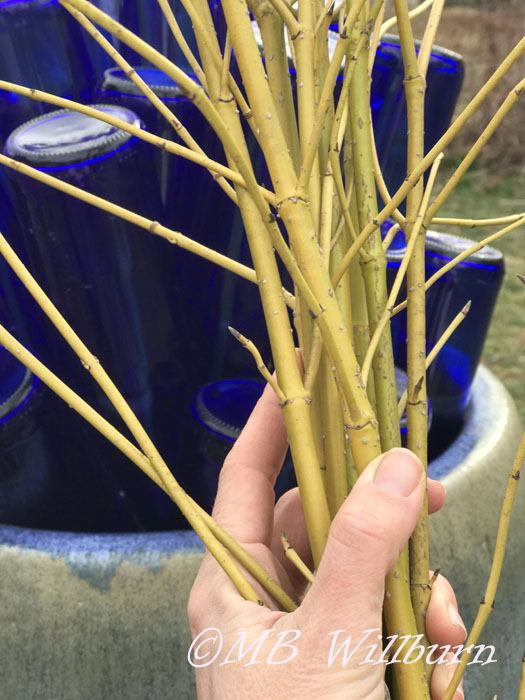 I find the rain has had me spending more time in contemplation of future gardens and existing ones, and this is not to be sniffed at. We can get so caught up in the work that we don’t give ourselves time to consider what we’re doing and why we’re doing it. Studying an area when it is naked and shivering is the best time to think about matters of slope, drainage, design lines, winter vs. summer sun, evergreen bones, winter color, rogue branches, overgrown brush, and the list goes on.

Think you can’t do that when it’s raining? That’s what a good coat, boots, gloves and an umbrella are for. Put a roll of fluorescent plastic tape and a sharpie in your pocket and when you have a brilliant thought about moving something, you can tag it to remind your spring addled brain. Put some construction flags in there too and you can tell yourself where it needs to go. Plastic tape is also a great way of marking large branches or trees that need to be removed – permanently.

Lastly, the rain has given me the chance to catch up on something I’m going to need very soon. Core-strengthening exercises. An intimate detail certainly, but a shareable one for the following reason: In just a few short weeks (according to a furry meteorologist and Target’s swimsuit display) spring will appear. Backs across America, the UK and Europe will quiver and ache thanks to underused core muscles and a cultural amnesia of the best ways to sit, stand and work.

A version of this article was originally published in The Frederick News Post, and is reprinted here with kind permission