Usually, a couple of hours outside on my hands and knees is all it takes to get the wheels of the mind careening toward a publishable, if highly editable, product.  This week, it took ten minutes. 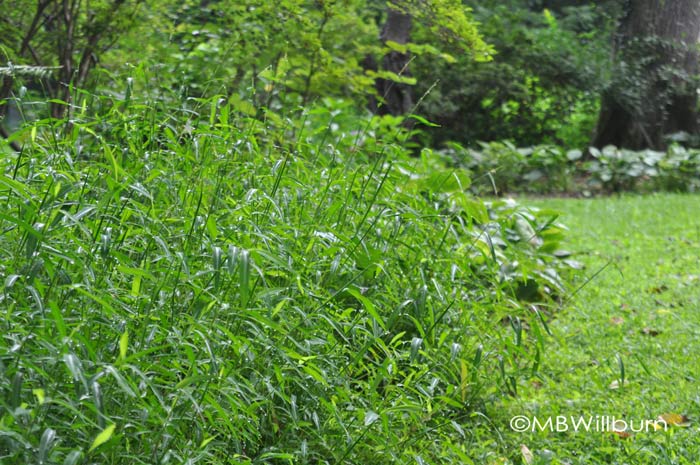 Ten minutes of repetitive grasping, pulling and tossing massive wads of reddening Japanese Stilt Grass (Microstegium vimineum) out of beds in a vain attempt to remove one twentieth of the seeds it was spilling.  At the end of six hours I practically ran for the laptop, roughly pushing aside sustenance and a recreational beverage just so I could effectively distill the essence of my vitriol.

Perhaps you are as yet unaware of this monster.  Five years ago I certainly was, but then I lived on the top of a hill in a sunnier situation.  Microstegium loves the rich soil of a floodplain, is well adapted to partial and deep shade, and flourishes along the banks of streams and rivers.  As such, it wants for nothing in my wooded stream valley. 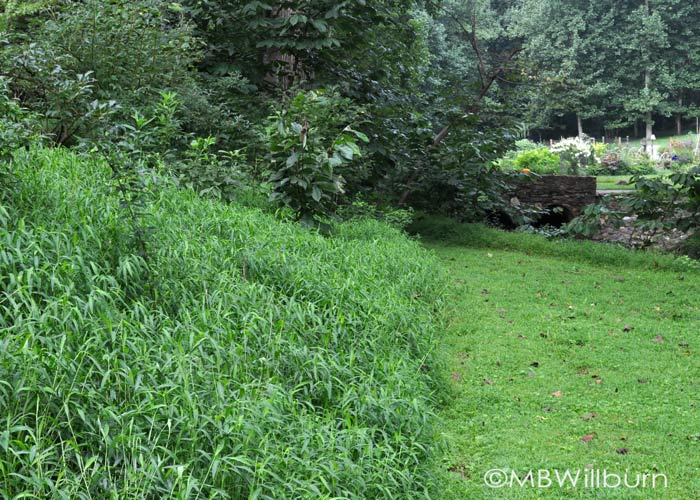 This once-bed is besieged by microstegium – which is choking out the hosta and ferns and just starting to set seed heads.  A prime time to get out there and get it out.

It is a grass.  A soft flowing grass that can illicit soft flowing comments from visitors that have never been up to their gardener’s hocks in it.  “How lovely!  How green! How well it grows in shade!” they insist.

And…I weakly nod in agreement.  If my entire property consisted of hard-to-mow slopes or stream banks, I might not take issue.  As it is, I actually dabble in growing other plants. And that’s something that microstegium cannot allow. At 2-3 feet tall, it roots at each node, creeping throughout beds already rife with seedlings.  It’s tough to compete.

It is of course an invasive weed.  It is of course, from east Asia.  And like ailanthus, Japanese beetles, brown marmorated stink bugs and Hello Kitty, there is very little we can do at this point but pray for a natural predator.

It is thought that the first seeds were brought to the United States in shipping containers containing fine china. Anyone who has created three foot stacks of the stuff only to fall, exhausted, onto one of them can attest to its fine cushioning properties and remarkable resiliency, but it does surprise me that this annual weed was first identified in Tennessee rather than the porcelain-hungry suburbs of Connecticut. Nearly a century later it’s in 26 states – many residents of which strongly prefer Dixie to Mikasa, but who will nonetheless pay a hefty price for the dinnerware choices of others. 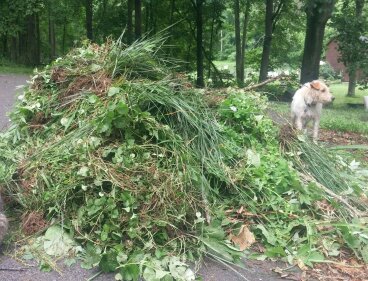 A morning’s worth of weeding microstegium and garlic mustard ends with a huge pile that I could conceivably use to ship fine bone china back to China.

Microstegium seeds last up to five years in the soil, possibly more – each plant contributing as many as 1,000 seeds per cycle. Be warned: If you’re lucky enough to have little in your garden right now, those are the kind of numbers that keep you up at night if you let it get established.

In our climate, you will see germination in mid-May as soil temperatures warm, but germination conditions will continue well into July, so spending 72 hours weeding a large bed over Independence weekend is not only futile but farcical.

The gardener’s mission is two-fold: Keep it OUT of established beds and slowly eradicate it from other areas where it has taken over – working towards a point where odd seedlings are easily removed.

Thick mulching:  Laying down cardboard and topping it with up to four inches of coarse mulch will prevent seeds from germinating.  But you must keep on top of it and not allow neighboring stands to seed into decomposing mulch.

Dense planting:    Deer have little taste for it, which is ironic, as they have a great taste for hosta, whose large leaves do an excellent job of smothering out seedlings.  When my dog does his duty, the hosta grow lush and the microstegium wait it out in the soil seed bank.  Geranium macrorrhizum, Begonia grandis, rhodos, hydrangea and others do a similar job.

Herbicide: A pre-emergent such as Preen can allow you to weed a section and keep it weed free, even if you aren’t able to weed and mulch the rest before it sets seed.  For those who prefer a Scorch and Burn approach, it is responsive to glyphosate  (as is the surrounding landscape), but this will not affect the seeds in the soil.

Hand pulling: As weeding goes, it’s one of the easiest, particularly when tall; but timing is everything.  If you weed early and neglect to mulch, you will weed again.  This is fine if you’re young. Otherwise, wait until mid or late August (just before it sets seed) to pull it out. New seedlings won’t have enough time to set new seed before the frost kills them.  Then, get that mulch down and start waiting out the seed bank timer, weeding as soon as you see a stray offender.

More information and ID photos are available through the websites of the USDA and the National Park Service.  If you’re starting to see more of this invasive weed, act swiftly before you’ve got a problem on your hands.  – MW

This article reprinted with the permission of The Frederick News Post