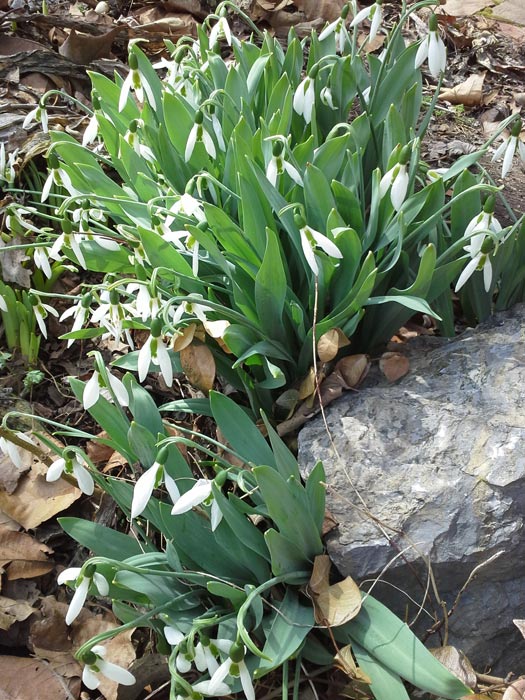 e are experiencing quite a warm up this month both in the Mid-Atlantic and elsewhere in the Northeast and Midwest.  Muddy pathways are not fun, but to walk down to the barn in the morning and feel the sun warm on my face instead of gritting my teeth against biting winds is beyond pleasurable.

However, it can create an impulse within gardeners to get started with our spring chores before it is time, causing damage that’s hard to undo.

January is definitely the month for planning that glorious spring garden, but if you’re having a hard time visualizing what ‘glorious’ could possibly mean to that space you’ve got outside the front door – I encourage you to pick up a copy of Big Dreams, Small Garden for a bit of winter inspiration.

“I should have planted that!” for January’s garden:

Whether you live in the Mid-Atlantic of the United States or New Zealand, look around each month for plants that turn you on and make you think “I should have planted that!”  Snap a picture to ID later at a garden center, or simply ask your neighbor what they’re growing and make their day.

Carefully observing other gardens month-to-month and putting in some of the wonderful things you see during the next planting season allows you to successfully increase your garden’s display season without having to experiment too much with timing.

This month it’s all about witch hazel.  (Hamamelis spp.)

January starts the witch hazel season for me (though it can easily start in December).  Witch hazels are small trees (5-15 feet) that work equally well in small or large lots and are winter/early spring bloomers.  Some species are native to North America (H. vernalis (Midwest) & H. virginiana (Eastern US), but many of the most popular cultivars are hybrids between the Japanese and the Chinese species – creating H. x intermedia. 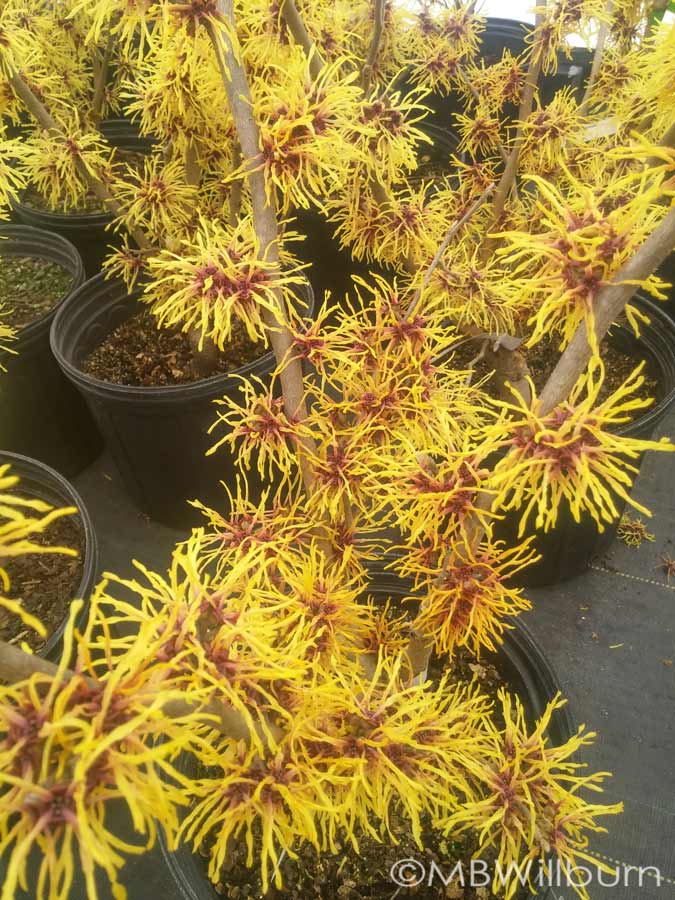 The unusual blossoms open in spider-like patterns (I know, way to sell them Marianne), and many are fragrant – some highly so.  If you don’t have a witch hazel in your garden, I highly recommend starting with a small tree such as ‘Arnold’s Promise’ (yellow blossoms) or ‘Wisley Supreme’ (also yellow).

My trees are still young – the earliest planted here at Oldmeadow was in 2017, but I’m currently growing six trees (four different cultivars) of H. x intermedia: ‘Jelena’ (orange), ‘Pallida’ (yellow), ‘Rochester’ (orange), and ‘Wisley Supreme’ (yellow), and seeing good bloom on the previous year’s wood.  No doubt I’ll have an H. virginiana in here at some point because I wish to observe the difference in bloom and habit.  The yellow fall color is also excellent on H. virginiana.

Witch hazels do well in sun or partial shade – though excessive winds in exposed sites can be tough on them.  Bloom is best in full sun. Fall color in some cultivars is excellent, others, not so much.  Fragrance is also variable, so it is worth researching before you buy. Plant in average to moist soils with moderate fertility, but do not give them wet feet or they will perish.

A quick note about the ‘dirty little secret’ of some cultivars.  Some trees hang on to their leaves through the winter and throughout their bloom season.  And when I say ‘hang-on,’ I mean it’s not a quick fingertip pulling – you need clippers.  If this bugs you, don’t tell yourself you’ll go out there and pull off leaves in January, because you won’t.  Or at least you will – for one season – and then you won’t.

‘Rochester’ is notorious for this, but it also possesses one of the strongest (if not the strongest) scent of any cultivar, so I grow it.  However, last year I saw an old ‘Rochester’ in Nancy Goodwin’s garden at Montrose (North Carolina), that changed my mind on the entire subject.  When the sun hit the tawny leaves and backlit the orange blossoms, the effect was sublime. I wouldn’t have had it any other way, and she agreed – having clipped off leaves for a few years and then left them to do their thing.

A great source of further information, and the trees themselves is Rare Find Nursery in Jackson, NJ.

Bearing in mind that January has as many don’t do’s as to-dos….

At the top of the list of DON’T’s should be pruning the branches (and buds) of spring flowering shrubs like quince, lilac, rhododendron, daphne, edgeworthia, forsythia, deutzia, and spirea. Wait until after they have flowered or you will lose those flowers.  If you want to bring a few branches in to force (a fine idea), take off branches you know you need to remove anyway. Win win.

With the fluctuating temperatures we have been experiencing now and in recent Januarys, it’s best to leave the pruning of summer bloomers till late next month or early March.  Sometimes I’ll cheat and do a little ‘trunk clear up’ to remove tiny, (often dead) unnecessary branches I didn’t get to last year (particularly from crepe myrtles and chaste tree), but this type of thing isn’t tip cutting, and doesn’t happen very often.

Use that time and energy instead to clear weed saplings, vines and brush from areas you have forgotten and areas you have ignored.  The dormant winter season is simply the best time to undertake this job.  1) You can clearly see them. 2) The foliage doesn’t get in the way of getting them out.

If you can pull them up by digging your fingers or a tool under the crown of the plant and under those roots, try to. Brace your back by squatting or lunging with one knee on the ground. Small multiflora roses, wine berry and bittersweet respond well if the soil is not frozen.

Often a light levering with a shovel will allow you to dislodge larger saplings. Otherwise, cut them at the base and be prepared to deal with them again in the spring – either with loppers or herbicide. Very few of my weed saplings give my loppers the final word.

Warmish winter weather makes us want to tidy, but there are ways of satisfying that impulse without causing damage.  Tidying hellebores is a good example of this and something I was doing just this weekend, removing old foliage and dead leaves that were smothering the crowns so that the new fat buds (many of which are about to extend and bloom) will be even lovelier – especially against the new foliage that has begun to unfurl for many of the orientalis hybrids. However, I did not completely remove the leaves etc.. around the base of the plant (the ‘blanket’) as it is soon to get very cold again.

Think of your plant like a child in a bed.  Just because it’s warm at bedtime doesn’t mean it will be warm later at night.  Thus we tuck them in and make sure they are covered and do not smother their heads with a blanket. 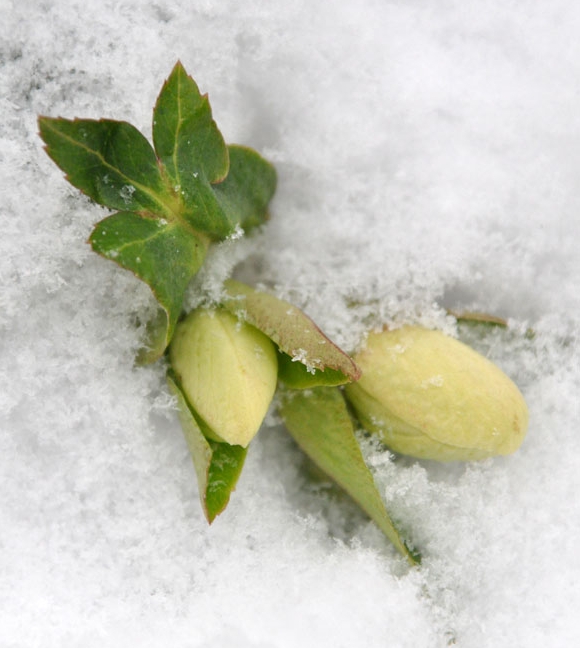 Planting and walking on soupy freeze/thawed soil can cause damage to soil structure it took years to achieve. You damage the roots of plants, tick off the worms and generally do terrible things. Patience is called for.

Instead, use that time to amend your soil with light dressings of compost or leaf mold.  Place planks on top of the soil to create pathways so your weight is better distributed as you work into the back of beds.

When ice storms turn your plants into popsicles, it’s best to leave them be until the ice has melted, as hitting or shaking them will ensure broken branches.  Dry snow can be gently released with a soft touch and a broom.

Cut back the foliage of large grasses that have sprawled beyond your comfort level.  Some will stay upright for months, but a hard storm can flatten them.  If they’re no longer adding value to the landscape, and you have the time, you can shear them now and take a job off your March calendar. (TIP: Tie them into a bundle with a bungie cord and then cut under the ligature cleanly with shears or a hedge trimmer.) 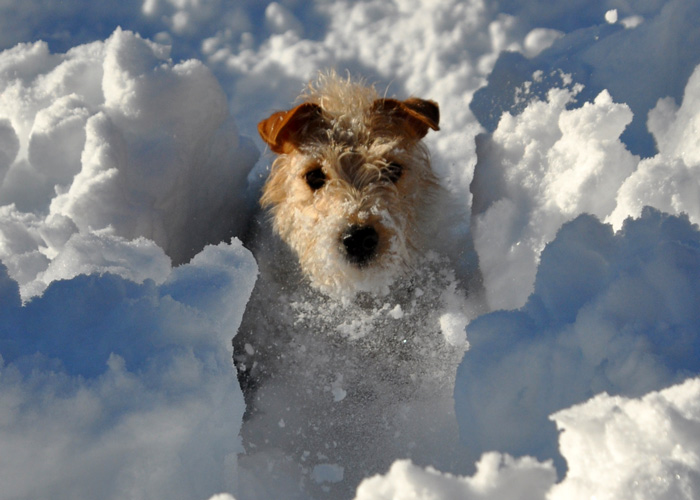 Check overwintering tropical plants such as cannas or bananas in garages or basements.  If they have started to throw leaves in any major way, adjust the temperature down and give them a little water to balance the that growth (which takes energy and resources).  With colder temps they will probably cut it out.  A little growth is fine – don’t panic.

Check any outside pots that are in a rain shadow under a roof eave.  Make sure they have a bit of moisture – especially the evergreen plants that are very susceptible to the burning of cold winds.

Fun, creative things to do – Get a bird feeder going. Make a dried arrangement entirely with what you can find outside (tell anyone who asks that it’s ‘Winter Art’). Sprout some alfalfa seeds inside for sandwiches. If you’ve still got a Christmas tree up, turn it into a Wildlife Tree. Peruse a seed catalog with a Sharpie.  Keep a record of high low temps in your journal.  Start looking for emerging hellebore blooms. Take this time for a bit of winter reading of garden books, blogs and magazines. Join the American Horticultural Association  – not just cause it’s the right thing to do as an American gardener, but because it’s a wonderful organization with an excellent, informative magazine and many other member benefits.

A few more don’ts ‘cause I’m loving this theme:

DON’T start clearing out refugees. If you took a division from a friend back in the fall and brought it inside to coddle then forgot about it, you may be seeing new growth now. Whether or not you’ve got room for something ungainly that belongs in the garden, you are now stuck with it. DON’T under any circumstances put it outside with the overwintering perennials or the shock will kill it.  Even a cold garage may be too cold. Spring has come for your little division. It’ll be spring before you can off-load it.

DON’T (or at least try not to) succumb to windowsill grow kits.  Invest in a small grow light for the purpose or re-purpose a shop light instead. Windowsills very rarely provide enough light to grow strong seedlings. Unless of course you have genuine, large, true south facing windows – then you’ll have to provide them with sunglasses.

DON’T ignore scale, mealy bug and aphids on your houseplants, hoping it will get better.  It won’t.  Horticultural oil (neem) is one of your best defenses – especially against scale.  If the infestation is very great on specific leaves, remove them completely.  More on treating this here.

DO have patience with your indoor plants.  April will be here sooner than you think.

“Then came old January wrappéd well
In many weeds to keep the cold away.
Yet did he quake and quiver like to quell
And Blewe his nayles to warm them if he may;