I can’t resist a challenge.  And neither, apparently can Scott Beuerlein of Horticulture & Garden Rant.  Thus, my rebuttal to his rebuttal to…well, you get it.

Somewhere near the bottom of every writer’s artistic license, a clever wordsmith will find the following recommendation:

“Comically exaggerating the position of one’s opponent is encouraged in the defense of one’s argument.”

Thus, after verbally sparring with Scott Beuerlein over the curiously inflammatory subject of whether to openly read British garden writers, or to do so under the covers by flashlight – all the while pledging fidelity to the American values of Weed & Feed; a tortured Scott is wrestling with the inadequacies of a Midwestern accent late into a Cincinnati evening, and I am apparently one step away from a sexting relationship with Monty Don. 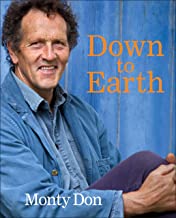 Monty Don’s newest book. For those of you who think of Don as a TV personality, I urge you to delve deeply into his books. He was (and I believe still is) a writer first.

Yet, beyond the slings and the arrows and the thoroughly base attempt to play cards as sneaky as cancer and a dead, beloved dog (I see you one dog and raise you a dad, Scott), the rebuttal beautifully illustrates the constant niggling suspicion American gardeners have that the British are looking down their noses at us, feeding us advice to help us fail, sniggering with intent, and securing all the fat Timber contracts in order to render our garden gurus speechless upon their own soil.

Or if you prefer, horseshit.

And when social media gets involved, the comments reveal our innate prejudices and (I believe) underlying insecurities as Americans.

I am not a self-righteous Brit who ignores and disparages American garden writers because I am so enchanted with the idea of tea at four and ha-has across the south lawn that I can’t remember my USDA zone. I AM an American garden writer with dual citizenship who has lived most of her life in America, reads authors on both sides of the Atlantic and writes for American publications on American soil. I married a Marine. And not as a war bride.

And neither is Scott a Trumpian angry ethnocentrist (as one commenter lamented) because he has a beef with the relevance of British garden writing to American gardeners. He was clearly just having a bad day.

Perhaps it was a work-related trauma. Spring is a cold and busy season at the Cincinnati Zoo. The last thing the Manager of Botanical Garden Outreach needs to have shoved down his throat is a picture of Fergus Garrett standing under a fruiting Musa basjoo.

Perhaps someone… [Read more at GardenRant]

Busy, brilliant London. Weather could not have bee

Yes it really looked like that. A few glorious day