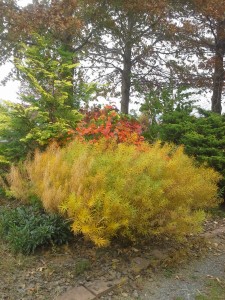 The autumn show-stopper, A. hubrectii backed by viburnum and thuja

The maples and oaks began to blush red in the woodlands last week, following hot on the heels of the tulip poplars and hickory that populate our hillsides and dominate the color scheme with rust and gold. With this final act, the end of the fall foliage season is upon us and winter looms; but there are still a few shrubs & herbaceous perennials that haven’t got the memo yet. These will keep the landscape held in some semblance of autumn until the first snow flurry reminds us of icy lanes and dented bumpers.

Virginia sweetspire (Itea virginica), is one of these hold-outs. A brilliant three-season shrub anywhere from 3 feet wide to 6 feet tall, it graces the garden with drooping, fragrant, finger-like blossoms in May, holds onto seedheads well into summer, and for your continual viewing enjoyment, finishes the season mid-November with brilliant red foliage worthy of the original ‘burning bush’, Euonymus alata. Furthermore, the native groupies can plant this with abandon, as it is a homegrown beauty and won’t embarrass the righteous during BayWise tours.

I am growing three of the common “Henry’s Garnet,” which have yet to turn anything approaching red, much less garnet, but I have been keeping a careful eye on another specimen gleaned from a plant exchange and purported to be same, but with a longer flower head and even better color. Last year, deep red leaves survived several windstorms, finally giving up somewhere in December. I have high hopes that my garnet might just be an undiscovered ruby. 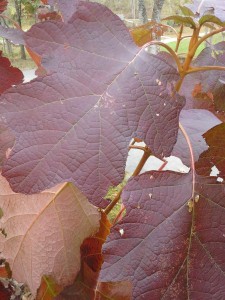 Hydrangea quercifolia, the oak-leaf hydrangea, is another North American native that won’t disappoint. Keep it safely from four-legged freezer fodder and you’ll be thrilled to have color when the trees finish their show. I am growing several in both shade and sun situations: the

‘Little Honey’ would love a little more light to live up to foliage expectations, but the others have done well. The straight species is currently the most brilliant of reds, and still holds flower panicles from the end of summer. My hope is to beg, buy or steal “Ruby Slippers” next season for an even better fall display, but failing that, I suppose I could try to hybridize it myself in my copious spare time, as it is a US National Arboretum cross between ‘Pee Wee’ and ‘Snow Queen’ – two unlikely lovers if ever there were. Amusing to think of an ice queen trying to fertilize a snow queen with a pee wee, but stranger things have happened.

And then there’s amsonia. For fall color in a herbaceous perennial, you’d be hard pressed to come up with something that tops this North American stunner. A. hubrictii gets all the press for breathtaking willow-like wands of prairie gold – especially when massed together with native asters as it is at the National Arboretum. But I must put a word in for A.tabernaemontana whose larger leaves I prefer in the summer garden and whose blue spring flowers seem to have more substance than those of A. hubrictii. Besides, A.tabernaemontana and I fell in love at Longwood many years ago; and my affection, once given, is rarely rescinded. 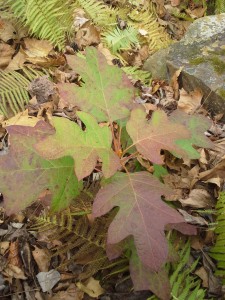 There are the last of the summer flowers of course – echinacea, cleome, Montauk daisy and the like. There are knock-out roses still giving it the old one-two, and fall-planted pansies preparing to stiffen their upper lips for winter. But I maintain that the beauty of the fall garden is not just to be found by sipping the dregs of the summer. One must plant specifically for the season.

Next spring, make your independent nursery happy: plant for the fall. With a mixture of superb foliage colors and exquisite bloomers such as ‘Sheffield Pink’ chrysanthemum or colchium bulbs you can make autumn last right up until the first Christmas party invite hits your inbox or warms the lonely recesses of that USPS reliquary at the end of your driveway.