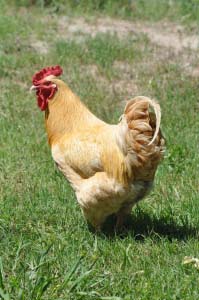 The topic of backyard chickens has reared its feathered head again, causing a spate of ruffled feathers and poor puns throughout local newspapers. It has been over five years since we fought and lost this particular battle in Brunswick.

Situated as I am now, comfortably out of city limits and ever more comfortably outside the auspices of an HOA-jury-of-my-peers, I have read the he-said, she-saids with a detached amusement, going so far as to read one article while my

[now legal] hens clucked and pecked at my ankles.

“Smelly. Dirty. Disease ridden,” I read aloud to their shocked little ears. “It seems,” I said to them thoughtfully, “that someone has mistaken you for your Perdue cousins.”

Indeed they have. What sensible person equates having two domestic dogs to owning a kennel of yapping, stinking canines? Yet here are [presumably] intelligent people presenting the farmyards of their grandparents as a valid parallel to four urban hens. 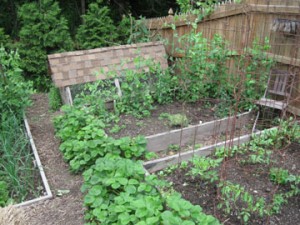 The very illegal four- chicken coop at the bottom of my old vegetable garden.

I have lived with both country and city chickens, though never, thankfully, on a commercial chicken farm, where thousands of chickens live their short, brutal lives in ignominy – the taste of fresh insects and succulent blades of grass merely a consummation devoutly to be wished.

Four chickens do not stink unless you are so devoid of common sense that you leave them in their own filth for months. In which case, you are also most unlikely to clean your house, your yard, or indeed, your own person, and you already have seven citations to your name and the marked censure of your neighbors.

For all our dreams of living greener, more connected lives, our wrinkled American noses betray the fact that we are happiest when the trappings of said life come from a marketing department. We want raffia ties around brown paper packages of environmentally-sound guilt-free consumerism. We want to compost – without counter-top scrap buckets. We want to garden organically – without hand-picking insects. We want to eat sustainably – in top-notch restaurants whose seductively clever menus appeal to our consciences and our taste buds. 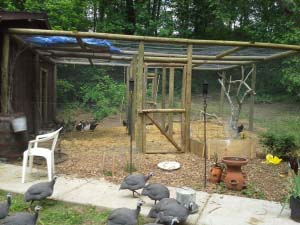 The very legal 24 chicken coop with attendant guineas at the new digs.

I once offered my city eggs from city hens to a city friend. She refused, citing her familiarity with the chickens in question, and wasn’t that a little gross? I didn’t know how to answer this otherwise environmentally-aware politically-active soccer-mom. Where on earth did she think an egg came from?

Much better, apparently, that the Magic Hens of the organic battery send them with Merlin the happy organic trucker in his enchanted 18 wheel diesel truck. ‘Organic’ and ‘sustainable’ being fabulous words when used in moderation.

Put aside your fantasies and prejudices and open your minds. If you are a gardener – particularly an organic one, chickens in the backyard are one of the smartest, most sustainable systems you can implement.

Chickens take garden waste and make garden fertilizer. They take bugs and scraps and grain and make perfect six gram protein pods. They take what you don’t need and can’t use, and make it usable. What do you need to do in exchange? Keep them safe. Give them water. Keep their bedding clean – pretty much what you do for your kids. I don’t know if you’ve ever been in a teenage boy’s bedroom, but two dozen country chickens have nothing on the rich pong emanating from my son’s living quarters these days. 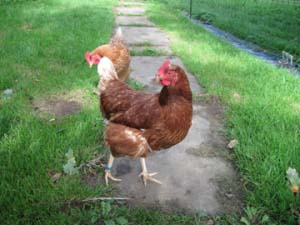 For the organic-raffia crowd that grimaces at the origins of a truly local egg, and shouts “not in my neighborhood!” when a neighbor replaces her clothes dryer with a clothes line – you’re missing the boat my dears, chickens are officially trendy. You can keep three in London in the garden of your Mayfair flat, or have two on a rooftop in Brooklyn.

Think of the accessories you could buy! Think of the paint swatches for the coop! Think of the cute names you could give them! And then, when you’ve considered all the decorating, the naming and the retail therapy – consider your hypocrisy. Believe me, the rest of us are.

Reprinted with the permission of The Frederick News Post