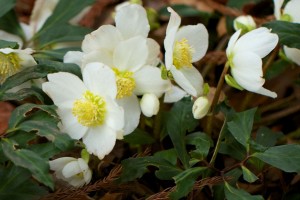 Three seasons in a garden and we all need a rest, but no sooner had I written the words, “It is finished” in a recent article than I was sent an e-mail from an (adjectives fail me) gardener friend letting me know that hellebores were surprisingly present and at deep discount at a local upscale grocery store.

Perhaps he did not recognize himself as the Evil Tempter I had referenced in said column: “winking and beckoning me over to the trunk of his car

[stuffed with plants].”  Perhaps he forgot about the camellias and the tender magnolia seedlings he recently brought me that I have yet to protect or plant (though it is now the end of December).  Perhaps he has long since stopped listening to that still, small voice of reason; or indeed the thousands of other voices at this time of year caroling on about Earth standing cold as iron and things being generally bleak out there.

Granted, I thought about it. I have space, the store is close and Helleborus niger is a fine plant with many attributes.  Also known as the Christmas Rose, it blooms from now until the end of February, is last on the deer menu, and sports fine, deep green leathery foliage when that “cold as iron” thing has the garden in a bit of a slump.

However, and much more importantly, H. niger is not a plant typically seen in the big boxes which cater to the spring/summer garden – much less in a grocery store that caters to the gourmet organic yuppie.  As such, the possession of one or more moves you up the plant-nut ladder from ‘likes gardening’ to ‘serious about gardening’ (next stop: ‘seriously ill’).  To get a couple hellebores for a few dollars and then brag about it next year at the plant exchange? Let me tell you, such flagrant one-upmanship is the only thing that gets many in the plant community out of bed in the morning. 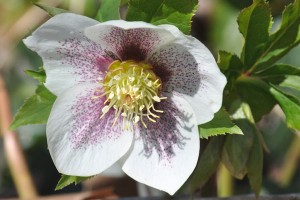 An H. x hybridus (Lenten Rose) pretending that February is just as warm as June

Nevertheless, I’m tired of writing articles about how weak I am. I re-read my column for guidance, recovered my resolve and replied to his outstretched apple with a snarky e-mail citing snow, commitments, financial prudence and a little thing called sanity.

It didn’t shame him, such words rarely do.

Instead he put the inflammatory information out to the listserve of one of our DC garden clubs, hoping for more enthusiasm. The equivalent of posting a sign outside the Betty Ford Clinic stating “Today only!  Half-price Glenmorangie!”,  his words had the desired effect and all chaos broke loose.

“What a deal!” some typed on the way out the door.

Not to be outdone, another confessed to picking up twenty for the paltry sum of 2/$10 and planning out a hellebore allée for next spring.

“You’re all killing me,” said another, no store nearby.

Then, one of the professional landscapers, being of sound mind and body, had the temerity to suggest that ‘HGC Jacob’ (the niger hybrid at the root of all this frenzy) hadn’t worked well for her in the past. The fury started to die down, but I knew it couldn’t last.  When nearly two hours had passed without further emails, Jim (name not changed as he is not innocent) stirred the pot again. “Was given a couple last year, blooming well now, and by the way folks, where’s the nearest storefront near DC/Montgomery County?”

“Germantown,” answered a garden mag editor, probably one-thumb-typing while she elbowed a small, golden-haired child away from the Christmas greenery and filled her cart. 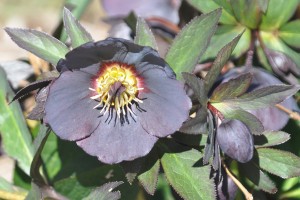 For two days, desperate gardeners with haunted, hungry eyes prowled the outside displays of local-area shopping plazas like the walking dead. And if two friends and fellow club rivals grabbed for the same pot after battling traffic for forty-five minutes? No doubt normal Christmas shoppers stopped bickering over the last can of mincemeat and stood aghast, memories of the Cabbage Patch Kids riots of 1984 flashing in their heads.

In time, the group was good-naturedly chastised by the well-respected curator of one of our local botanical gardens who had some choice – but unprintable – words for those who would sell body and soul to possess a good plant at a great price.  He was to lose all credibility later however when he added, “we got some last year too.”

What did I do in the end? The thing is, there is no sense battling one’s inner nature – that’s what Lent is for, and we’re talking about Christmas Roses, not Lenten ones.  Besides, all these people live within a few miles of the Beltway and I don’t think anyone thought about the Leesburg store.  I’m on my way there now.