Change Up Your Plants

Change Up Your Plants

Tired of the same old, same old?  Euonymus and Knock-Out roses just not blowing your proverbial skirt up anymore?  I understand.  It’s not that we don’t love many of the old standards or even the new, old standards, it’s just that we want to expand our horizons…try new plants…see new textures… have fresh nervous breakdowns. That comes with experimenting, and that can only be achieved with new plant material. 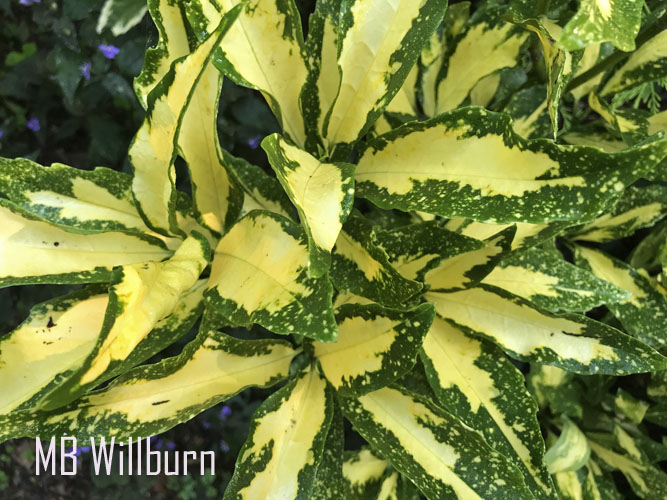 The creamy yellow centers of Aucuba japonica ‘Picturata’ are attention-grabbing.

What’s new to a particular gardener in a particular stage of his or her gardening is of course relative.  Kris Devine at Potomac Garden Center introduced me to a fascinating new-to-me grass, Leymus (Elymus) arenarius ‘Blue Dune‘ last week and I bought one on the spot.  It is a vivid blue grey, casually and messily upright in a millennial bed-head sort of way, a good size at 30 inches, and genuinely lovable. I may even build a grey garden around it.

Yet, I proudly showed this treasure to a plant friend days later and I get…”oh yeah…lime grass.”

So, before we go any further in this column, I will need to manage the expectations of a rabid few of you.  Yes I know that you go on plant buying expeditions to Michigan and come back with expensive black pots full of plants that normal people consider “weedy.” I know that you outwit TSA security guards on international flights with cuttings stashed in your money belt. I know that to wow you, I’m going to need to reach deep down and come up with something known to nine people and Barry Yinger.

This column is not for you.  Read it, by all means, but please do not send me follow-up emails.

Instead I appeal to gardeners who are not, at this point in their journey, rabid, and merely want something different. 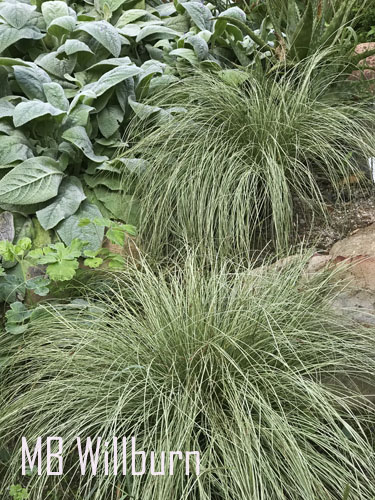 My thoughts stem from landscapes I walk by (in an attempt to jog by) a few times a week in a neighboring subdivision.  I look at the neat-as-a-pin hostas, the forsythia shaved to within an inch of its life and the seas of magenta azaleas, and I long for what could be with a bit more thought. Such reflection keeps my mind off the stitch in my side and whether I might want to have an updated baseline EKG taken before my next cardio session.

But gardening is considered a chore for many people (poor, lost souls), and most chores are executed quickly and with the least amount of thought possible.  Just last night I walked by a man cutting off all the seed heads on his purple fountain grasses in (no doubt) an attempt to tidy them.

I wanted to stop and tell him that those soft, buff colored cylinders were the point, and if one was going to go to the trouble of buying what is, in effect, a high-end annual, one might as well get the most bang from one’s buck; but I had to curb my dog away from the very same plants and I didn’t think the advice would be well-received.

Thus, I am also not directing these words at those of you who just want ‘something green in the front’ or think that ‘no maintenance’ is a thing.

So now that it’s just the ten of us, let’s look at some options to stop keeping up with the Jones’ and we’ll focus on a few of the most common landscape plants out there.  There are many more, but my editor has his limits (both patience and word count), so consider taking a trip to your local independent garden center, finding a knowledgeable staff member and asking, “Hey, I’m really bored with x.  What can I grow instead?”

When they pick themselves off the ground, they’ll have answers for you – maybe even a kiss.

If you grow: Knock-out roses for color and three-season interest…

Rugosa roses were knockouts before Knock-Out was a thing.  These shrub-like roses are amazingly disease resistant and covered in great looking foliage all season that goes a bright shade of yellow in autumn. The flowers are highly fragrant and, if dead-headed, will continue to bloom through late summer. If you don’t want to dead head, you’ll get fat, red hips instead (the good kind). Sun. Z2-7. 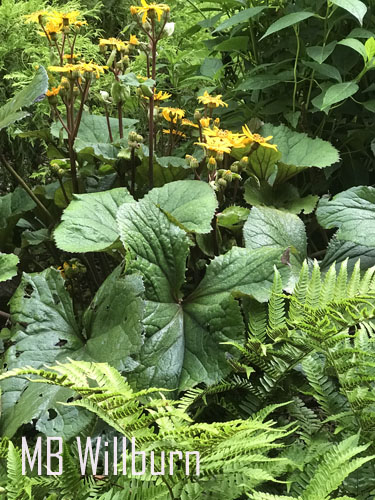 Big, bold and beautiful, Ligularia dentata ‘Othello’ pairs well with ferns and other hosta companions in the shade garden.

If you grow: Hostas for lush foliage…

Ligularias love some of the same conditions that thrill a hosta but add a new foliage texture to your shade gardens.  Depending on species, their large, often round, sometimes serrated leaves are greenish-purple on top, purple on the undersides and have deep purple-red petioles.  Their daisy-like flowers are school bus yellow, but if you’re the person who cuts off hosta flowers, you can do that just as well with a ligularia.  ‘Britt Marie Crawford,’ ‘The Rocket’ and ‘Othello’ are some of my favorite cultivars.  Afternoon sun is a killer. Z4-8.

Or ‘Sulphurea Marginata,’ or ‘Lemon Flare’ or ‘Suruga Benten’… There are so many interesting cultivars of what is an exceptional shade-garden shrub that it’s hard to go wrong. With the help of Google, it will be hard to choose.  I’m not denigrating ‘Gold Dust,’ it’s just that there is another way, and that way is gorgeous.  Roots will rot in badly drained soil. Z7-9.

If you grow: Golden euonymus for evergreen anchors…

This beautiful shrub was actually introduced to the trade by our very own (or near very own) Brookside Gardens in Montgomery County, MD.  The golden variegation of the holly-esque leaves is given even more oomph in spring when the new foliage emerges flushed with pink.  Plant  against plum-colored foliage plants such as ninebark or weigela for a stunning combination. Sun to part-shade. Z6-9.

If you grow: Fall chrysanthemums for late-season color…

A grower friend of mine once told me that she had trouble selling Japanese anemones – one of the loveliest fall-bloomers out there – because they bloomed later and thus no one would pick them up during the spring frenzy.  These enchanting plants provide a good ground-covering foliage mass (sometimes too good), and send up colorful, summer-like flowers in the early fall – pairing beautifully with the likes of ‘Baby Joe’ dwarf eutrochium, hardy low grasses like ‘Hameln’ pennisetum and reddening winterberries.  My favorites are the classic white, ‘Honorine Jobert’ and the pinks, ‘Queen Charlotte’ and ‘September Glow.’ Z4-7. 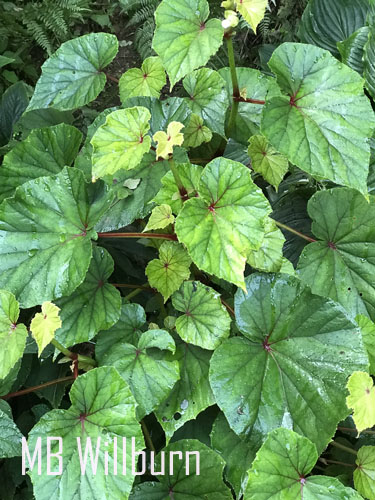 When Begonia grandis flowers in mid-to-late summer, it’s almost unnecessary – the foliage has been providing a lush accent to shade beds all season long.

If you grow: Tender begonias for foliage and flower…

The hardy begonia is underused and underappreciated.  Quite probably it is very difficult to sell if the flamboyant series ‘Dragon Wing’ is sitting next to it on a table of begonias in early spring, but where ‘Dragon Wing’ will require another cash outlay next spring, B. grandis will continue to reward the gardener year after year with lush, often spotted foliage, and mid-to-late summer flowers in pink or white.  A bonus to this plant is the blood-red undersides of the leaves.  Plant them along an elevated shady path and you’ll suck in your breath when the sun shines through the foliage.  Morning sun is best. Z6-7.

If you grow: Liriope for short, grassy, vertical accents and amazing flexibility…

With the huge amount of introductions in this genus in recent years, I can get my carex fix in just about every color.  Some carex are marginally hardy in our zone (such as the russet C. buchananii ‘Red Rooster’ or C. flagellifera ‘Toffee Twist’) and may need extra mulch and a good winter, but the new Evercolor series (Carex oshimensis), including such beauties as the silver ‘Everest’ or my favorite, the golden ‘Everillo’ is reliably hardy. Sun to Part Shade. Z5-9 (depending on species).

This article reprinted with kind permission from The Frederick News Post